In the past 24 hours, we’ve seen a spike in complaints from people who say their PCs, Macs and servers were taken over via the widely used remote-control tool on their machines. Even users with strong passwords and two-factor authentication enabled on their TeamViewer accounts say they were hit.

It appears miscreants gained control of victims’ TeamViewer web accounts, and used those to connect into computers, where they seized web browsers to empty PayPal accounts, access webmail, and order stuff from Amazon and eBay.

“Hackers got everything from me,” Doug, an Idaho-based Twitch streamer who was looking forward to celebrating his birthday today with his wife and two kids, told The Register.

“They remote connected in at 5AM MT, went into my Chrome and used my PayPal to buy about $3k worth of gift cards. And yes, I had two-factor authentication.”

Over on Reddit, people were lining up with tales of their systems being compromised via TeamViewer, sparking fears the platform had been hacked. TeamViewer makes remote-control clients for Windows, OS X, Linux, Chrome OS, iOS and Android.

“I never expected this to happen, but it did,” wrote Redditor Eric1084.

“When I sat down on my chair, I saw my mouse is moving across the screen. Of course, I immediately revoked remote control, and asked who [the hacker] is. At that point, he disconnected, and attempted to connect to my Ubuntu server, which has all my backups. Good thing I connected to [the server] right after he remote’d into my workstation. I revoked his permission before he tried to open Firefox. Immediately after, I started panicking, and thought he just stole all my passwords.”

Another Redditor, famguy07, added: “I had the same thing happen to me tonight. Luckily I was playingRocket League. I terminated [the connection] after less than 10 seconds. Once it clicked in my brain what had happened, I logged into my server and exited TeamViewer to deal with it later.”

Pouring further fuel on the fire that TeamViewer had been infiltrated by criminals, at about 0700 Pacific Time (1500 in the UK) today TeamViewer suffered an outage lasting at least three hours, which knocked its website offline and left people unable to connect to their computers remotely.

It’s claimed TeamViewer.com’s DNS was screwed up during the IT snafu, thus stopping people from getting through to the Germany-based company’s servers. We’ve heard that its DNS servers were pointing towards Chinese IP addresses at one point, but we haven’t been able to verify that.

TeamViewer has said sorry for the downtime.

After getting its systems back online, TeamViewer insisted that its security was not breached. In a statement bizarrely dated last week but referencing today’s events, the biz instead blamed “careless use” of passwords by its customers. People aren’t using strong enough credentials, or are reusing passwords from websites that have been hacked – such as LinkedIn and Tumblr, we’re told.

“Users are still using the same password across multiple user accounts with various suppliers. While many suppliers have proper security means in place, others are vulnerable,” the company said. 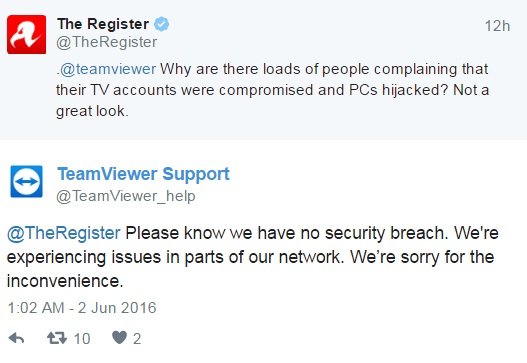 TeamViewer spokesman Axel Schmidt told The Register by phone from Germany tonight that his company has not found any sign of a breach, and suggested people who have been hijacked contact the police.

It is possible that some folks have been caught out by password reuse, or by weak passwords, or by a Windows Trojan disguised as an Adobe Flash update that’s doing the rounds using TeamViewer to backdoor machines.

Yet, we’ve heard from people who have used passwords unique to TeamViewer, who have enabled two-factor authentication, and have found no malware on their computers, losing control of their systems in the past few days via TeamViewer. It’s possible the DNS cockup was part of an elaborate plan by cyber-fiends to intercept people’s logins and swipe their passwords, but the company is adamant there was no security breach.

If you do use TeamViewer, now would be a good time to triple check your password and security settings to keep miscreants out, and inspect your connection logs and your web browser history for any unauthorized accesses. ®

In a second statement today, TeamViewer said its DNS systems fell offline because they were pummeled by a denial-of-service attack. “TeamViewer experienced network issues because of the DoS-attack to DNS servers and fixed them,” the biz said. “There is no security breach at TeamViewer.”