Security experts at Google Project Zero team have discovered another critical remote code execution (RCE) vulnerability in Microsoft Windows OS, but this time the hackers defined it as the worst Windows RCE in recent memory.

The popular Google Project Zero hacker Tavis Ormandy announced its discovery during the weekend. The expert alongside with his colleague, the researcher Natalie Silvanovich, discovered the RCE vulnerability in Windows OS.

Ormandy did not provide any further details of the Windows RCE vulnerability because according to the Google bug disclosure the IT giant will give a 90-day security disclosure deadline to any company to solve the problem in their solutions and publicly disclose it.

The experts only revealed the following information on the Windows RCE vulnerability: 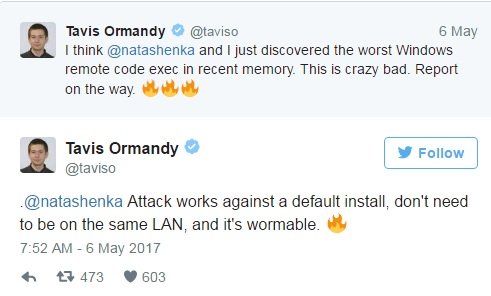 If you are interested in the details of the Windows RCE vulnerability discovered by the Project Zero Team, you will have to wait for 90 days.

The Google Project Team’s disclosure deadline was criticized by many security experts in the past, especially from Microsoft, but Google experts always ignored them.