Today, in coordinated press releases, the US Department of Justice (DOJ) and Europol announced the takedown of two Dark Web marketplaces — AlphaBay and Hansa Market.

US Attorney General Jeff Sessions officially confirmed today a coordinated international law enforcement effort to take down AlphaBay after news of raids and arrests in the US, Canada, and Thailand leaked to the press last week.

In a similar announcement, Europol announced that Dutch police together with the Federal Bureau of Investigation (FBI) and the US Drug Enforcement Agency (DEA) had also managed to take down the Hansa Market. 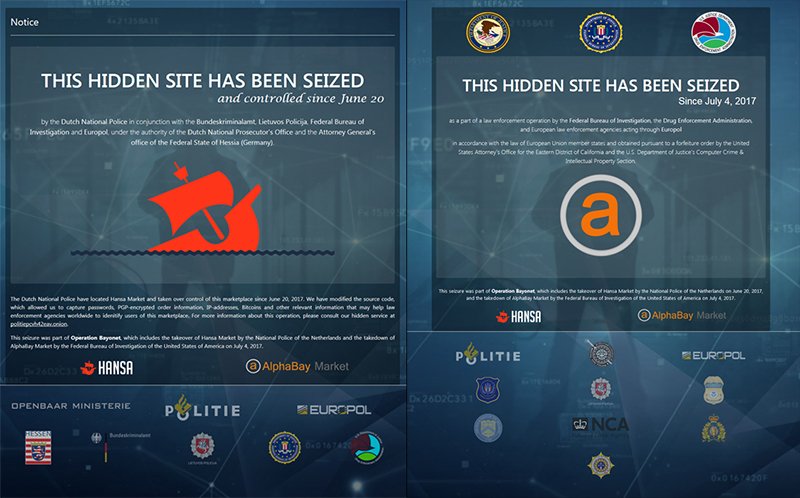 First to fall was the Hansa Market after Dutch officers seized control over their servers located inside one of the country’s hosting providers.

Dutch Police seized Hansa servers on June 20, but the site was allowed to operate for one more month as officers gathered more evidence about its clientele.

In a separate action, US and Canadian authorities seized the servers of the AlphaBay market on July 4, shutting it down a day later. The DOJ also confirmed today that a Canadian national arrested in Thailand was Alpha02, one of AlphaBay’s admin.

Alpha02, real name Alexandre Cazes, was arrested by Thai police on July 5, but took his own life while in prison on July 12.

The Dutch Police’s effort to keep the Hansa Market operation was a stroke of genius, because troves of AlphaBay users created accounts and moved illegal operations on Hansa.

Robbert Pattison, Active Deputy Administrator for the DEA issued a dire statement for all crooks who rushed to register new accounts on Hansa after the AlphaBay takedown.

“Since the undercover operation to take over Hansa Market by the Dutch police, usernames and passwords of thousands of buyers and sellers of illicit commodities have been identified and are the subject of follow-up investigations by Europol and our partner agencies,” Pattison said.

“In the past few weeks, the Dutch Police collected valuable information on high value targets and delivery addresses for a large number of orders,” a Europol spokesperson also added on the topic. “Some 10 000 foreign addresses of Hansa market buyers were passed on to Europol.”

In opposition, Silk Road, which authorities seized in November 2013, listed a meager 14,000 listings for illicit goods and services at the time authorities took down the service.