A malware group is using Facebook’s CDN servers to store malicious files that it later uses to infect users with banking trojans.

The previous attacks that used Google and Dropbox URLs were documented by Palo Alto’s Brad Duncan in a July write-up, and are almost identical to the ones detected last week by security researcher MalwareHunter.

The group uses Facebook’s CDN because the domain is trusted by most security solutions and there are low chances of having it blocked, compared to hosting malware on domains rarely active inside a business network.

The infection process starts with users receiving a spoofed email from the attackers. These emails pose as official communications from local authorities and contain a link.

The links lead to Facebook’s CDN (Content Delivery Network). Attackers upload files in Facebook groups or other public sections, grab the file’s URL, and add it in spam emails. One of the malicious links might look like this:

Users who click on the link will download an RAR or ZIP file. These archives contain a link file (shortcut).

If users click on the link file, the shortcut path invokes a legitimate application installed on most windows PC — such as Command Prompt or PowerShell — to run an encoded PowerShell script. This technique of using local applications to hide malicious operations is known as “Squiblydoo,” and its purpose is to bypass lower-end security software.

Group is going after only Brazilian users

According to MalwareHunter, during these twisted procedures, the group also checks the user’s geographical location based on his IP address. If the victim is not from a target country, the infection operation will be aborted and the infection routine will download (and eventually load) an empty last-stage DLL file. But if the victim is from the target country — Brazil in this campaign — the legitimate EXE file side-loads a malicious DLL file.

This DLL file then downloads and install Banload, a malware downloader that is later used to deliver a banking trojan that targets Brazilian users only, which ESET detects as Win32/Spy.Banker.ADYV.

Win32/Spy.Banker.ADYV was seen in live infections earlier this year, in July 2017, by ESET’s Brazil division, in a campaign known as DownAndExec, also carried out by the same group.

Researchers believe this is the same malware group behind the Banload campaign that targeted Brazil in 2016, and another campaign that pushed the Escelar banking trojan in 2015, also targeting Brazilian users primarily.

MalwareHunter, the researcher who spotted the recent activity from this threat actor, describes them as very sophisticated, even more so than some recent nation-state cyber-espionage groups.

The threat actor also possesses the firepower to carry out large spam campaigns that push out the malicious emails. The group borrowed techniques from online marketers and used 1px by 1px tracking images embedded in their spam emails to see who opened their emails. These small images were loaded via goo.gl short links, allowing MalwareHunter to detect the campaign’s reach. For example, a campaign MalwareHunter spotted on September 2 pushed out emails that were viewed by at least 200,000 Brazilian users. Two other campaigns also garnered between 70,000-80,000 views each.

Currently, the campaign has subsided after raging strong for almost a week, but experts expect it to come back once more, with yet another small variation. Facebook was notified and is also looking into the issue. 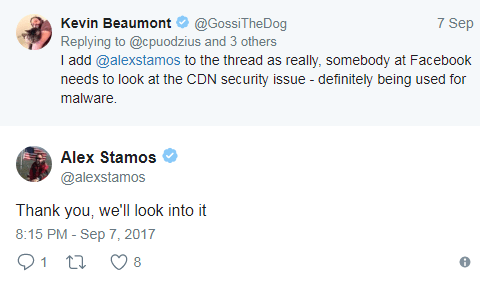