Cisco Systems released a patch Monday to fix a critical security vulnerability in its Secure Sockets Layer VPN solution called Adaptive Security Appliance. The vulnerability, according to a Cisco Security Advisory, could allow an unauthenticated and remote attacker to execute remote code on affected devices.

The vulnerability impacts nearly a dozen Cisco products ranging from 3000 Series Industrial Security Appliance, ASA 5500-X Series Next-Generation Firewalls and ASA 1000V Cloud Firewall. The bug (CVE-2018-0101) received a CVSS score of 10, the highest you can get. There are no workarounds available for the bug, Cisco said.

“The vulnerability is due to an attempt to double free a region of memory when the webvpn feature is enabled on the Cisco ASA device,” according to the advisory. “An attacker could exploit this vulnerability by sending multiple, crafted XML packets to a webvpn-configured interface on the affected system. An exploit could allow the attacker to execute arbitrary code and obtain full control of the system, or cause a reload of the affected device.”

Security experts are recommending impacted companies patch at their earliest opportunity because of the critical nature of the bug.

“Traditional VPNs like Cisco’s expose an open port to the Internet, so any remote user on the planet can connect to it,” said Jason Garbis, co-chair of the Cloud Security Alliance’s Software-Defined Perimeter Working Group. The vulnerability, he said, will give an attacker access to a corporate network. 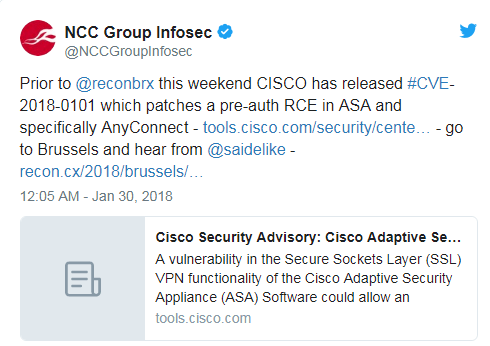 “There are hundreds of thousands of these Cisco devices deployed worldwide. There are no workarounds – organizations must manually identify and patch all their Cisco ASA VPN servers in order to address this,” Garbis said.

While the vulnerability impacts many ASA devices, only those with the “webvpn” feature enabled are vulnerable, Cisco said. System admin can check to see if their device if vulnerable by checking to make sure the Cisco ASA software release is “9.2.4.25” or higher.

Cisco credited researcher Cedric Halbronn, with the NCC Group, for discovering the vulnerability. Halbronn is scheduled to give a talk regarding his discovery at the REcon computer security conference in Brussels, Belgium on Friday.